Questionable Claims Regarding the Lost Earnings of a Professional Athlete

In a recent medical malpractice suit, former NFL defensive tackle Sharrif Floyd sued his surgeon, among others, for damages and lost earnings totaling in excess of $180 million. As claims for future lost earnings need to be established to a reasonable certainty, Mr. Floyd faces an uphill battle in demonstrating that amount is not speculative given historical NFL player data.

The Complaint describes the $180 million figure as comprising:

Much of the $180 million likely reflects what Mr. Floyd claims he would have earned in additional NFL employment contracts and endorsement deals. The Complaint asserts:

“…His capacity to earn, commensurate with the top players at his position (some earnings close to $24M/year) over the coming decade – his reasonably anticipated and intended career duration – has been reduced to $0.”

NFL players’ contract values are publicly available, yet do not appear to support Mr. Floyd’s contentions regarding his earning capacity.

Shariff Floyd was a first-round draft pick in 2013 (#23 overall). He was drafted by the Minnesota Vikings and given a five-year contract. The following table summarizes Mr. Floyd’s career earnings of approximately $11.5 million as reported by overthecap.com. (Note: Mr. Floyd did not play football in the last year of his contract, and some of the monies are in dispute related to that year. The career earnings identified in the table assumes he was paid.)

As discussed below, it is not unusual for an NFL player to not realize the full value of their contract, as it is not guaranteed unless earned. The fully guaranteed amount is a fraction of the contract value and is protected from any skill, injury, and salary cap terminations.

Mr. Floyd played approximately three full years prior to the 2016 incident that allegedly prematurely ended his football career. Based on survey data from 1993 through 2011, the average career length of an NFL player is 3.3 years. However, highly skilled players seem to have significantly longer careers. According to the survey data from 1993 through 2011, first-round draft picks (like Sharrif Floyd) have an average career length of 9.3 years. The following table summarizes additional detail from this 1993 through 2011 survey period.  (Note: The data is published by Statistica and the National Players Association.)

However, it appears that these timeframes have declined in more recent years. Data published by the Wall Street Journal (“WSJ”) for the survey period, 2008 through 2014, suggests a reduction in the average career of an NFL player to 2.66 years. This data indicates that in and around 2008, a NFL player’s career length across all positions declined. According to the WSJ, after a period of relative stability, the average length of an NFL career dropped almost two and a half years (from 4.99 to 2.66 years) from 2008 to 2014. It is unknown if this downward trend will continue, but the decreased worklife duration in more recent years reflected in the below image (published by WSJ) should not be ignored. 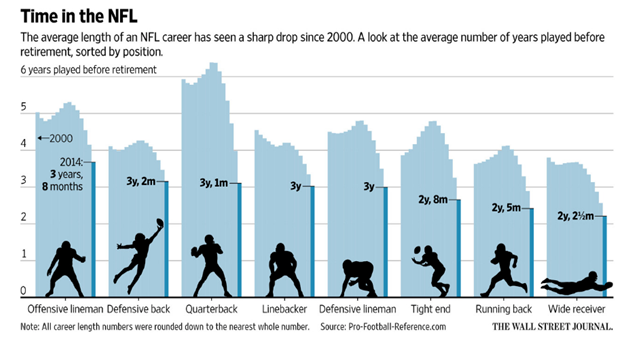 Looking at similar players’ career earnings can be instructive in estimating what Mr. Floyd would have otherwise earned. As the player’s NFL position, draft round, and draft year can suggest different career paths, those criteria can be applied to select similar players. Data published by overthecap.com suggests the following defensive tackles drafted in the first round between 2012 and 2014 may be helpful in assessing Mr. Floyd’s potential earnings under a second contract.

*This is the initial full guarantee; additional contract monies can become fully guaranteed as the player meets certain criteria.

Although not included in the above table based on the inclusion criteria, it is interesting to note the experience of the highest earning defensive tackle in history, Gerald McCoy of the Tampa Bay Buccaneers. Mr. McCoy is a six-time Pro Bowler widely regarded as the best defensive tackle in the NFL. He was drafted in the first round of 2010 as the #3 pick. To date, Mr. McCoy has earned $110 million. According to overthecap.com, he has potential earnings of approximately $152 million based on his current contract, which will take him to 12 years in the NFL. However, these additional earnings are not guaranteed; they are predicated on, inter alia, whether he is on the Buccaneers roster on the third day of each League year. Even if Mr. Floyd was able to establish that he would have been one of the best NFL defensive tackles in the NFL, it is unlikely he would have earned much more than Mr. McCoy.
The following are some initial thoughts and considerations considering the above data:

Fulcrum Inquiry assists lawyers with economic damages associated with personal injury (including medical malpractice) matters, through both direct employment of damage expert witnesses and with our interactive settlement tool.