Undocumented workers in the United States received refundable tax credits totaling $4.2 billion in 2010, an amount which is dramatically higher than occurred previously.  An audit by the Treasury Inspector General for Tax Administration recommended changes in how these payments are made.   The IRS dismissed the recommendations, saying (without support) that they did not have the authority to do anything more than make payments to the known illegal aliens.

The audit report summarized the government payments as follows:

“Refundable credits can result in refunds even if no income tax is withheld or paid; that is, the credits can exceed the liability for the tax. Two of the largest refundable tax credits are the EITC

[Earned Income Tax Credit] and the ACTC [Additional Child Tax Credit].  The appropriations for these credits in Fiscal Year 2010 were $54.7 billion for the EITC and $22.7 billion for the ACTC. Because concerns were raised by Congress, the Government Accountability Office, and the IRS regarding noncompliance with EITC requirements, a law was passed in Calendar Year 1996 to deny the EITC to individuals who file a tax return without an SSN [Social Security Number] that is valid for employment.  As such, filers using an ITIN [Individual Taxpayer Identification Number] are not eligible for the EITC. The change in the law was made prior to the establishment of the ACTC.  However, the same law prohibits aliens residing without authorization in the United States from receiving most Federal public benefits, with the exception of certain emergency services and programs.

The audit report described the Additional Child Tax Credit or ACTC as follows:

Anyone can make a claim for these payments, including illegal aliens, by simply filing out a tax form.  Government payments to known illegal aliens are rapidly increasing because of legislative changes in these refundable tax credits.  The audit report summarized the law changes as follows:

“Although they are not authorized to work in the United States, ITIN filers are receiving billions of dollars in CTCs and ACTCs … Prior to Tax Year 2001, the CTC was only refundable if the taxpayer had three or more qualifying children and Social Security taxes exceeding any earned income credits. The Economic Growth and Tax Relief Reconciliation Act of 2001 removed these requirements and increased the CTC over time from $500 to $1,000 per child, making more families eligible for the refundable portion of the credit (known as the ACTC). Since then, claims for the ACTC by ITIN filers have increased significantly. In Processing Year 2005, 796,000 ITIN filers claimed ACTCs totaling $924 million. By Processing Year 2008, these claims had risen to 1,526,276 ITIN filers claiming ACTCs totaling $2.1 billion.

The American Recovery and Reinvestment Act of 2009 (Recovery Act) temporarily increased eligibility by changing the income threshold for calculating the ACTC for Tax Years 2009 and 2010. Prior to the Recovery Act, the ACTC would have been limited to 15 percent of earned income more than $12,550. The Recovery Act changed this threshold to 15 percent of earned income more than $3,000. As such, more taxpayers could claim the ACTC or claim a greater amount.  In Processing Year 2010, 2.3 million ITIN filers claimed ACTCs totaling $4.2 billion.”

The audit report graphed the amount of the refundable credits as follows: 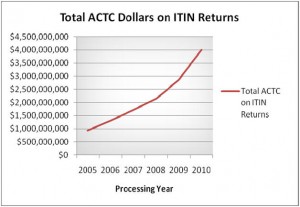 One might think that illegal aliens (including those that are not even working) could not complete the tax return because a social security number (SSN) is needed.  The audit report dispels this myth by reporting that anyone can fill out a tax return with a made-up SSN, or a SSN of another person.  If such identity theft occurs, the IRS will often not identify the fraud and will make the requested cash payment.  The sample taken in connection with the audit identified that 22% of the claims that the IRS actually paid had indications of identity theft.  These fraudulent claims are in addition to the $4.2 billion of payments summarized above.

“Many individuals who are not eligible to obtain an SSN earn income in the United States. This presents a problem for tax administration because the Internal Revenue Code requires foreign investors and individuals working without authorization in the United States to file tax returns and pay any Federal income taxes owed. As explained by a former Internal Revenue Service (IRS) Commissioner, ‘the IRS’s job is to make sure that everyone who earns income within our borders pays the proper amount of taxes, even if they may not be working here legally.’”

This would be a worthy reason if the IRS were actually collecting taxes from these people.  Instead, the net effect of the entire program is LESS money, because the IRS is paying out substantially more money in refundable credits than is being collected.  In 2010, the IRS reports that only 24% of the tax returns with ITIN showed any tax whatsoever.  Those returns showed a total tax of $870 million.  $977 million of tax withholding occurred with these returns.

72% of the ITIN returns showed ACTC, and those returns received $4.2 billion of refunds.  In other words, if the IRS were to merely scrap the entire ITIN program, and all of the refundable ACTC with it, the U.S. Treasury would be ahead billions of dollars annually.

The IRS response to the audit provides no meaningful details of why the IRS is making these payments.  The IRS merely responds that it does not have the authority to deny making these payments.  One would think that the IRS would cite the statute underlying this claim, but no law, tax case, or other support is provided for the IRS’s claim of the lack of authority.

The essence of the entire IRS response (at least that portion that can be seen by the public, since the IRS redacted much of the report) follows:

“… The report accurately describes recent legislative amendments that have contributed to the increase in both the number and amount of claims for the Child Tax Credit (CTC) and its refundable component, the Additional Child Tax Credit (ACTC). … Unlike many other tax benefits, the law does not require the taxpayer or eligible child to have a social security number in order to receive the CTC or the ACTC. … The IRS does not have the legal authority to deny credits during processing.”

Although immigration policy is not the focus of the report, the audit includes the following conclusion:

“The payment of Federal funds through this tax benefit appears to provide an additional incentive for aliens to enter, reside, and work in the United States without authorization, which contradicts Federal law and policy to remove such incentives.”

The IRS commits in the report that it will discuss the audit with the Treasury Department.  But, the IRS is already part of the Treasury Department, and could presumably discuss this internally whenever it wanted.  It appears that the IRS plans a brush-off.  Congressional action is needed, particularly since the IRS reason to take no action involves a lack of statutory authority.