Based on results of its May 2011 survey, the Associated Press (AP) reported that President Obama hit his highest approval rating in two years, with his approval shooting past 50 percent based on the economy:

“President Barack Obama’s approval rating has hit its highest point in two years — 60 percent — and more than half of Americans now say he deserves to be re-elected, according to an Associated Press-GfK poll taken after U.S. forces killed al-Qaida leader Osama bin Laden.

In worrisome signs for Republicans, the president’s standing improved not just on foreign policy but also on the economy, and independents — a key voting bloc in the November 2012 presidential election — caused the overall uptick in support by sliding back to Obama after fleeing for much of the past two years. …

Despite a sluggish recovery from the Great Recession, 52 percent of Americans now approve of Obama’s stewardship of the economy, giving him his best rating on that issue since the early days of his presidency; 52 percent also now like how he’s handling the nation’s stubbornly high 9 percent unemployment.”

Granted, this AP poll was taken closely after the Osama bin Laden killing, so most would expect the President to receive a bump up in the polls. Nevertheless, AP does its readers a disservice by suggesting that the survey results are indicative of future election outcomes. As explained below, AP makes significantly incorrect claims about likely election results because its poll (i) starts with a more Democrat-friendly profile, and (ii) is not based on likely voters.

AP polls start with a population having a different political profile

The AP poll is a telephone survey of the American general population, typically including approximately 1,000 interviews. AP has conducted this type of survey almost monthly since at least April 2009. All of these surveys include some common questions (the same question asked every survey), and new questions based on current events. One of the common questions includes requesting the interviewee to identify themselves as Democrat, Republican, Independent, or none of these. This is a common question amongst nationally-recognized polling firms, such as Gallup and Rasmussen. Both Gallup and Rasmussen asked a similar question in its telephone surveys of the American general population, for at least 22 years and 7 years respectively. 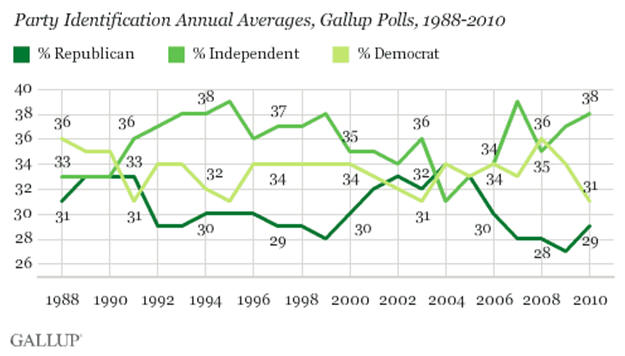 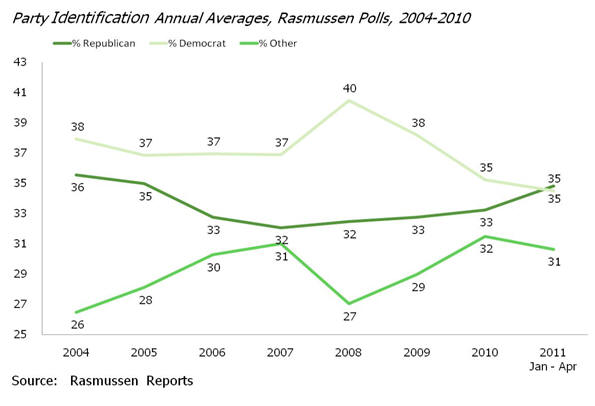 The following third chart shows that, in practically every month where data was available, significantly more people identified themselves as Democrat than Republican in the AP poll than in the Rasmussen poll. In most months, the differences are quite significant. In the most recent May 2011 AP poll that served as the starting point for this article, AP reported that Democrats have a spread of 17 percentage points over Republicans. Although Rasmussen’s May 2011 data is not yet available, Rasmussen’s poll between January 2011 and April 2011 showed Democrats and Republicans have been approximately even. (Monthly data was not available for Gallup to make similar monthly comparisons.) 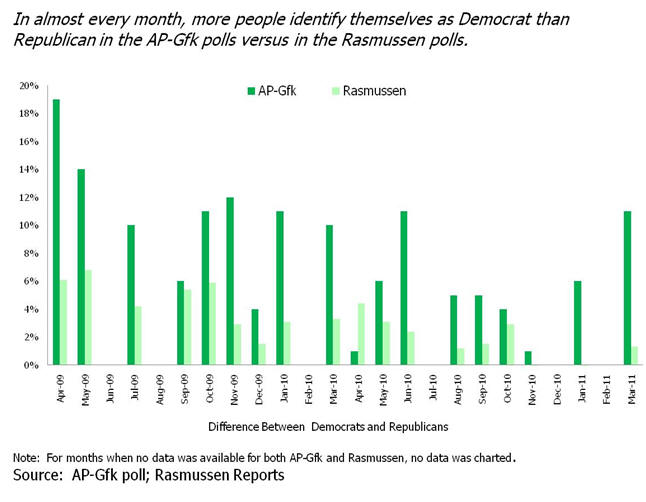 In 2010 (when data was available for all three pollsters), both Gallup and Rasmussen had a two-percentage point Democrat edge over Republican. AP had three times that spread, with 6 points. Chart 4 below shows details. Independents and those declining to respond to this question are not included in Chart 4, so the total of respondents does not total 100%.