Valuation Case Instructs Controversial Valuation Topics, And The Proper Use Of Expert Witnesses

Home|Valuation and Appraisal|Valuation Case Instructs Controversial Valuation Topics, And The Proper Use Of Expert Witnesses

Valuation Case Instructs Controversial Valuation Topics, And The Proper Use Of Expert Witnesses

A 2006 case from the Delaware Chancery Court (Open MRI vs. Kessler – Case No. C.A. 275-N) addresses several current valuation issues. However, in the process of explaining its rationale, the Court also provides important reminders regarding how (not) to handle expert testimony.

Many appraisers contend that two otherwise identical corporations (except for the taxation election) must be worth the same. Stated otherwise, no buyer will pay more for the ability to operate as a Subchapter S Corporation. To mathematically accomplish this result in their appraisal calculations, appraisers holding this view impose a full pro-forma corporate tax before performing other valuation calculations. On the other end of the spectrum, the three leading tax cases (Gross, Heck, and Adams) provide no tax adjustment whatsoever, which leads to an appraisal result that a Subchapter S Corporation is worth considerably more than an identical C Corporation.

In contrast to these two extreme positions, the Court performed a calculation that is between these two extreme positions. Specifically, the Court calculated hypothetical tax collections that equated an S-Corporation and a C-Corporation. The result is that the Subchapter S corporation was assessed a 29.4% tax adjustment for valuation purposes, calculated as the bolded item in the following table: 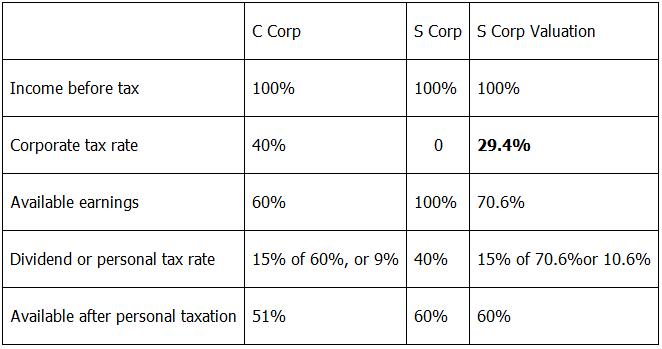 A second issue involves whether future events should be considered if they are reasonably foreseeable at the valuation date. In this case, the subject company had expansion plans that were sufficiently underway such that market participants would consider the expansions. Most valuation experts agree that events which have not yet occurred as of the date of value should not be considered. Some appraisers take this to an extreme, to the point where the reasonably foreseeable possible expansions should be ignored. The Court properly recognized that this extreme view is contrary to what real market participants try to accomplish when addressing the future prospects of an enterprise.

The Court received widely divergent valuation opinions, ranging from $6.8 million to $26.4 million. In parsing through the conflicting conclusions, the Court found ample reason to be disappointed with one of the valuation experts. The result was devastating to that side, as the Court frequently stated that it accepted the opposing expert simply because that other expert did not demonstrate the same unfortunate bias.

Timothy Reed is the expert the Court found was biased. In quoting the Court below, we replace names with titles/descriptions to aid our readers’ understanding. Here is what the Court had to say:

“Reed’s knowledge of the relevant facts regarding

[the Subject Company] seemed unduly constrained by his clients, and his blinkered view of the business impaired his ability to reach a reasoned determination of value. For these reasons, I give more weight to [Reed’s opposing witness] and lean on his analysis when there is no better method to break an impasse.”

“Reed seemed to view his task as valuing particular [operations that his client] brought to his attention. Consistent with that narrow prism, and as we shall see, his very incomplete understanding of the nature of [the Subject company], Reed did not even consider whether [the Subject company] was more valuable as of the time of the merger because of the plans it had developed…”

“Reed’s testimony seemed more aggressively driven by his goal of reducing what [his client] would be ordered to pay. Moreover, Reed was given marching orders in his work before and after the merger that led him to undervalue [the Subject Company]. Indeed, those orders were such that Reed did not even know he was valuing [the Subject Company and not a subset of it] before he finished his valuation.”

“Reed simply took it as a given that [his client’s] unilateral decision to double the management fees paid to [his client’s affiliate] was a fair one, which reflected a reasonable market price.”

“The basis for Reed’s reduction was speculation by [Reed’s client] and Reed’s own opinion that the Delaware reimbursement rates were high relative to neighboring states and that they were likely to fall. But the record is devoid of information from more objective sources to substantiate that viewpoint, which like other elements of Reed’s and [his client’s] testimony, fits with the self-interest of [Reed’s client].”

Expert witnesses are persuasive only when they are viewed as expressing their own analysis and conclusions. Such analysis needs to be prepared independently after all meaningful information is made available to the expert. Those that wish to constrain their experts as the Court perceived are wasting their money, and running the risk that the expert will be disregarded. Of course, even inexperienced lawyers know this. Nonetheless, we are amazed at how frequently our potential clients wish to do just that.