Is Christmas becoming more expensive?  For the first time ever, the cost of the gifts featured in the Christmas carol, “Twelve Days of Christmas,” totals more than $100,000.  Financial services company, PNC Wealth Management, just released its 28th annual estimate of the “Christmas price index”, a whimsical economic indicator that tallies the prices of the following basket of Christmas gifts from the well known carol.  Here is a summary of their calculation: 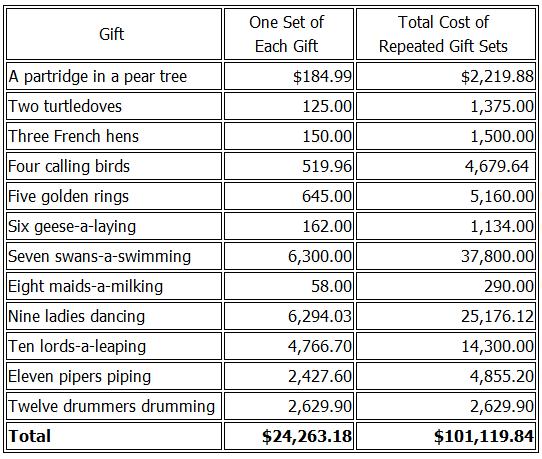 This year, most news stories covering the release of this price index fixate on the record-breaking price tag, implying that the cost of Christmas, as measured by the cost of twelve days of gifts, has also reached a record high. But are the twelve days of Christmas really the most expensive ever?
In answering this question, we assess the valuation of the above list of products.  While the Christmas price index is clearly not intended as a serious economic indicator, we proceed with this exercise of dissection and scrutiny to illustrate some of the most common problems with valuations generally. A proper valuation of the Twelve Days of Christmas would avoid the following mistakes.

The 2011 Christmas price index increased by 4.4% over last year and by 60.9% since the index’s inception in 1984.  In spite of this seemingly large increase, we cannot conclude that the twelve days’ of gifts specifically have become more expensive because nearly all goods and services cost more now than they did in the past.  Therefore, to assess the relative cost of Christmas, the price index should adjust for changes in overall prices (i.e. inflation).  The following chart traces the price index since 1984.  Although the green line (representing the price index without an inflation adjustment) shows an increase, the red line (which includes the inflation adjustment) demonstrates that the Christmas price index has actually become cheaper over time relative to other goods and services.

Particular attention should be given to components that comprise a large portion of any valuation.  For example, one of the most prominent features of the above chart is the precipitous drop in the price index occurring in 1995.  The decline in 1995 occurred almost entirely because the cost of each swan allegedly dropped from $1,000 to $500. The source for the price of swans, the National Aviary in Pittsburgh, sounds legitimate enough.  But upon further inspection, we find that the Aviary (i) is not a bird retailer, and (ii) does not does own a single swan among its 600-plus bird species.  Moreover, we should further question the price used, as the prices of swans used between 1984 and 1994 remained curiously static at $1000 dollars per swan.  After 1995, the cost per swan took a nose (swan) dive, and still has not recovered as of 2011.  The volatile cost of swans is especially disconcerting because the swans make up over 36% of the cost of the entire index.

Nearly all of the gifts are sold at multiple locations at various prices. To (i) avoid challenges with any particular source, and (ii) be more representative of costs generally, it is preferable to look to multiple pieces of data.  For example, the index relies upon one jeweler’s estimate for the cost of golden rings, when a more accurate approach would calculate the average cost using several jewelry retailers. Use of multiple sources would also be superior for the valuation of the other eleven gifts.

Many of the gifts are sufficiently complex to require an explicit definition prior to valuation. For example, what ensemble of goods constitutes the eighth gift of maids-a-milking?  No doubt this gift includes the eight laborers, which is solely what the current index uses.  But additional items are also required. The maids won’t be “a-milking” without a milk cow, a stool, and a bucket.  The index’s author does not include the cost of these accessory goods.  The index’s author strays farther from the actual cost of maids-a-milking by simply using the federal minimum wage to calculate the gift’s cost, without any consideration of whether this is the most likely wage that would need to be paid.
Anytime the gift involves a service (i.e. milking, drumming, piping, dancing, or leaping), the duration of the service provided must be defined, as these gifts would most likely be purchased in specific time increments. The index currently assumes that the gift includes one hour of service. This assumption is problematic because musicians and performers typically require a relatively larger fixed fee for any engagement.  The incremental one hour of labor represents only a fraction of what would actually be needed to obtain the service.
When the gift involves birds, the index fails to consider the costs of handling and maintaining the animals. The partridges, turtledoves, French hens, calling birds, geese, and swans require food, cages, and in some cases, skilled laborers to provide care. These accessory products highlight an additional question relevant to true cost: how long must the recipient care for these animals? Keeping the birds once purchased creates high, long-lasting costs. Perhaps an altogether better approach would be to rent the birds, but this is an entirely different cost combination that comes with an entirely different price tag.
Because of these ambiguous service and animal costs, the five golden rings might appear the least complicated and most easily valued product.   Even so, at least two aspects still require definition: the number of karats (in the U.S., usually 10K, 14K or 18K) and the weight of each ring.

If a product cannot be purchased in an established market, determining that product’s value becomes more difficult. Fortunately, most of the products can be bought and sold; however, a market for ten lords-a-leaping seems highly implausible. Thus, how are we to estimate the cost of the tenth gift?  The index’s author appraises a different product altogether – ten male ballet dancers, and obtains a price quote from the Pennsylvania Ballet.  Of course, ballet dancers aren’t lords.  An alternative approach would be to attend a concert in which actual lords leap. Recently, ten real Lords (i.e. British nobles) could be seen leaping in Westminster, England as a way of promoting the annual Christmas concert by the Parliament Choir, a choral group made up entirely of members, employees and Lords in Parliament.  Here is a picture:

Tickets to the concert, which likely include a showcase of ten lords-a-leaping, cost between 9 and 26 British Pounds.  This is currently between 14 and 41 U.S. Dollars. This approach is admittedly limited because the not everyone can travel to the concert in Westminster at an equivalent cost; therefore, the cost of the ten lords varies significantly by location of the gift recipient.

This seasonal valuation offers an opportunity for playful economic thought, including attention to potential valuation pitfalls.  We do not wish to ruin the fun of the holidays.  But, if you want to appraise something, you need to do it right.  Taken together, these mistakes call the accuracy of the Christmas price index into question.