Baby Names As A Marketplace: What Are Americans “Buying”?

Baby Names As A Marketplace: What Are Americans “Buying”?

The press has recently been giving a lot of attention to a court battle between two parents over their son’s surname and whether the presiding Judge overstepped her bounds by also ordering an unrequested change of his first name, from Messiah to Martin.  Of course, there is no lack of unusual names bestowed upon infants, but perhaps more surprising is how this particular name is not as unusual as one might expect.  The U.S. Social Security Administration (“SSA”) publicly reports its database of approximately 100,000 different names given to babies born in the US from 1880 through 2012.  Yearly counts are reported by gender for each name, totaling about 330 million births.  The availability of this type of data allows us to answer additional questions about various names and related trends.

According to SSA statistics, there were 762 baby boys given the name Messiah in 2012 alone, making it one of the fastest growing names for boys in the United States. The chart below shows Messiah’s popularity since 1880: 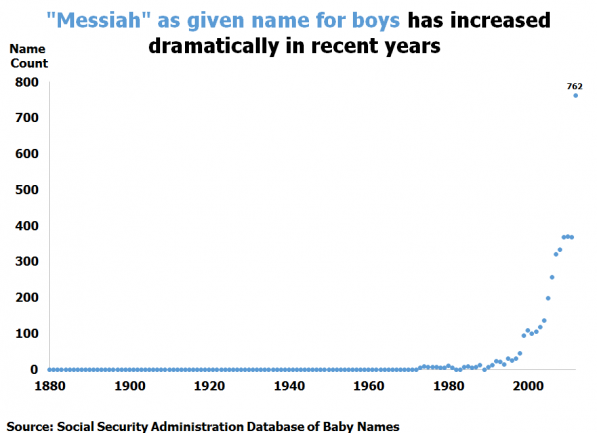 We can think of the process of naming children as a market activity. The “market” consists of parents (i.e. consumers) who select a name (i.e. product) from a wide assortment of options. Although this particular market has no sellers or relative prices, we can still perform a traditional market concentration analysis.  A highly concentrated market means that only a few names (e.g. John, David, Mary, or Elizabeth) are assigned over and over again and therefore represent the majority of birth names in a given year.

Within economics, a standard method of measuring market concentration is using the Herfindahl-Hirschman Index (HHI). The Index converts market shares of all of the market’s participants into a single number ranging from 0 to 1 (or alternatively stated as 0 to 10,000) with 0 representing a perfectly competitive market and 1 representing a complete monopoly. The Department of Justice uses this same metric when evaluating anti-trust concerns associated with potential mergers and acquisitions.

Using the yearly name data provided by the SSA, we calculated the HHI by gender for every year since 1880. In general, the name market is highly fragmented, which comes as no surprise since we began this discussion by acknowledging the wide variety of names given during this time period. The chart below shows the HHI for the boys’ and girls’ name markets for every year since 1880 in blue and pink respectively. 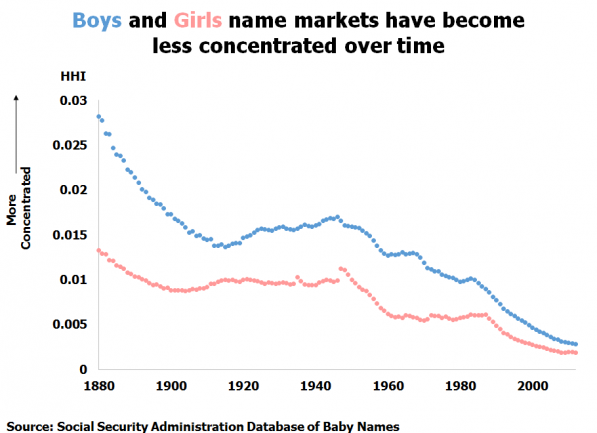 Over the entire period, the boys’ name market has been more concentrated relative to its female counterpart. However, both name markets have become significantly less concentrated with time. Part of this decrease is artificially created by virtue of how the data was collected. Each name is only counted if a person registers for a Social Security card and submits gender information. According to the SSA, registration completeness improved dramatically from 1880 to 1937.  By the early 1940s, most new births in the US were recorded with the SSA dataset.  This means that for the period preceding 1937, name diversity and market share information is less complete, thereby biasing the estimates of market concentration upward. Nevertheless, we see an unmistakable downward trend during the period for which we have accurate data.

We can think of several hypotheses to explain this fragmentation.  First, new immigrant groups often introduce new names to the market.  What matters for this mechanism is not that large volumes of immigrants come to the United States, but that many different, previously unrepresented immigrant groups arrived in the US and now participate in the name market.  Second, it’s possible that parents increasingly desire to be unique and cool by avoiding “mainstream” names.  Third, the name market naturally grows in diversity over time because names never really “die.”  While certain antiquated names lose popularity, they may perpetuate regardless because some children continue to be named in honor of older relatives.

The above data is separately reported for male and female children.  However, a noted trend in child naming in recent years is unisex names.  While names like Grant or Greg are generally associated with males and Isabelle or Antoinette are clearly associated with females, other names are significantly more androgynous.  When you receive an email from an unknown Sam, Morgan, or Jamie, it can be difficult to discern the sender’s gender.  What makes a name clearly suitable for one gender or the other?  Although some names “sound” decidedly masculine or feminine, most of our perception of what makes a name suitable for only one particular gender stems from how consistently that name is only used by one gender but not the other.  In other words, boys’ names aren’t especially masculine sounding, they just happen to be given almost exclusively to boys.  Unisex names, therefore, lack gender markers because the name is assigned to boys and girls with roughly equal frequency.  Another interesting question that can be answered with SSA data is “what name is assigned to boys and girls most evenly?”

We assigned each name a “unisex score,” defined as the degree to which a name’s counts by gender approximated a 50-50 split.  For example, if a name was given to 100,000 boys since 1880 and 100,000 girls in the same time period, the name would have a perfect (i.e. the highest) unisex score because the split is exactly even. For the purposes of this analysis, we limited our attention to names with total counts above 100,000 so highly obscure names with perfect unisex scores (e.g. “Ammer” or “Elmi”) wouldn’t clutter our results.

Based on the analysis described above, the most unisex name in US history is Riley. Since 1880, 154,000 people have been named Riley in the United States. Of these people, 46.6% have been female and 53.4% have been male, resulting in an extremely high unisex score for the name. The top five most androgynous names by this same metric are:

The popularity of each of these names waxes and wanes over time. The below charts show counts for these most unisex names over time, with girls and boys represented by the pink and blue lines, respectively.

While unisex names’ popularity fluctuates over time, the names are popular for girls and boys simultaneously.  If the popularity by gender were to occur separately (i.e. not concurrently), gender confusion would be more easily avoided.  For example, until about 1940, Leslie was almost exclusively assigned to males, but has since become mostly a female name.  Therefore, if we hear about a Leslie born before 1940, our guess should be that the person is male, but we should reverse our guess for younger Leslies.

The top 5 most feminine names are:

We will wrap up our analysis by examining a particular name that would famously score low on the unisex scale.  In 1969 Johnny Cash released a song which described the perils of being “A Boy Named Sue”.  The song reaches a memorable finish when Sue’s father recounts his reasoning,

“Son, this world is rough
And if a man’s gonna make it, he’s gotta be tough
And I knew I wouldn’t be there to help ya along.
So I give ya that name and I said goodbye
I knew you’d have to get tough or die
And it’s the name that helped to make you strong.”

Did other fathers agree with this logic?  As it turns out, it wasn’t just one fictitious father who named his boy Sue.  SSA data reveals that at least 519 boys have been named “Sue” since 1880 in the US (because the SSA only reports name counts for (i) years with 5 or more occurrences and (ii) people who signed up to receive a social security card, the annual number is really a floor).  The chart below shows the counts of boys named Sue by year: 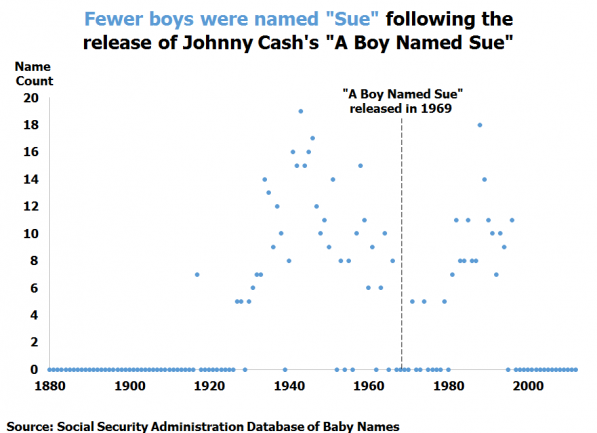 Although it can’t ever be described as a commonly occurring (the highest count of 19 male Sues occurred in 1943), one might note that the well-known song did not inspire increased popularity of the normally female moniker for baby boys.  Since the release of “A Boy Named Sue”, 166 boys named Sue have been reported, with a few years of lowered numbers immediately following the event.  In this case the song might have negatively impacted the usage, by highlighting the pitfalls of such a choice.

This type of market analysis has many uses, from academia to the courtroom.  Analysis of the interplay of competitive forces, buying trends and event studies is useful in everything from assessing the possibilities of a new product launch to capturing the economic impact of a particular incident and many applications in between.