Research On Compensation And Fraud Point to the Fraud Triangle

Research On Compensation And Fraud Point to the Fraud Triangle

A recent study in The Journal of Financial Economics suggests that a compensation structure that relies on financial performance measures can be tied to incidences of fraud.  Generally, the study concludes that individuals are more likely to engage in financial misstatements when the there is little downside and high upside.  The implication is that this relationship can have predictive value and alert compliance officers and other interested parties to situations where vigilance should be heightened due to the increased likelihood that fraud may exist. The idea that there is more incentive for an executive to participate in financial misstatement when it seems achievable without detection and directly affects their pay (or continued employment) is reasonably intuitive.

Further, compliance officers and anyone else tasked with preventing and detecting fraud should already be aware of the predictive factors that are associated with fraud.  The fraud triangle is a relatively simple and well-established illustration of those factors, namely the interplay of three forces: 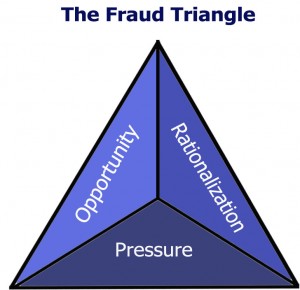 While fraudulent activity is often associated with a pressing economic need, that need is not always a result of dire finances.  The high upside described above is a relief of Cressey’s financial pressure, also sometimes described as incentive or motivation.  This can manifest from various sources, whether a serious financial problem, such as pressing debt derived from family illness, gambling addiction, etc. or from a desire to maintain a certain lifestyle or from the realization that employment may not continue unless certain expectations are realized.

Opportunity can be synonymous with a belief that there is little downside, i.e. that there is situation, such as a lack of internal controls, where one can accomplish the fraud and will not be caught.  The fraudster perceives that there is a method to accomplish his deceit, solving his financial pressure without detection.

Rationalization is the third leg of the triangle and is important to the underlying psychology of fraud.  Many fraudsters do not see themselves as criminals, but rather as temporarily caught in unfortunate circumstances which their fraud can solve.  Often fraudsters who are caught indicate that it was their intention to repay the money in the future or that they were acting for the greater good to meet an important need (a Robin Hood mentality).  Others rationalize their behavior by justifying why they were truly entitled to the money, that the employer somehow deserved it, or that it was a victimless crime.

Understanding the circumstances which set the stage for potential fraud is an important component in its prevention and detection.  While the study described above is not necessarily ground breaking, it is a good reminder that evaluating the motivations and opportunities for fraud are key steps in assessing the risk of fraud.