Why Do Some States Offer More Public Holidays?

Why Do Some States Offer More Public Holidays?

With the recent midweek July 4th holiday, many offices found that the following Friday was something of a partially observed holiday, with many employees electing to take a vacation day and enjoy a four day weekend.  Of course, companies vary significantly in the number of paid holidays they offer their employees, but interestingly so do states.  Observed holidays for state employees range from 9 to 13.5 holidays with an average of 10.9 days. Some of these holidays overlap with certain Federal holidays (e.g. Martin Luther King Day, Christmas) while others are more idiosyncratic to particular states (e.g. Cesar Chavez Day in California and Jefferson Davis Day in Alabama). Even given the varying number of state specific honorees, states still elect which to observe with a paid holiday and the variance is notable.

One plausible explanation (theory) is that liberal (blue) states generally offer more holidays than conservative (red) states, because blue states are perceived to favor larger government and more generous benefits for public employees. However, when this theory is tested using regression analysis, the political ideology of the state is not statistically related to the number of state holidays. The figure below illustrates the non-relationship graphically. 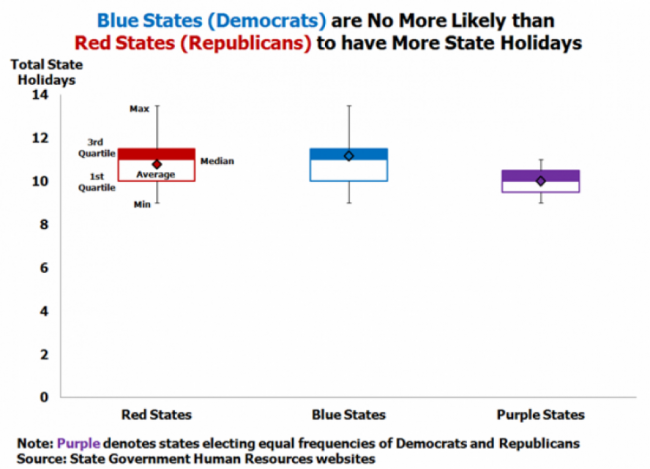 Several additional variables were also considered in the regression model, but none were found statistically significant. These variables include: religiosity, median income, population, percent urban, number of state employees, average temperature, and the age of the state.

The key explanatory variable for the theory originally proposed is “Republican Victories,” which measures the frequency by which a particular state generally votes Democrat or Republican. Contrary to the original theory’s prediction, no statistically significant relationship exists between Blue states and additional holidays.

The two variables that do appear to account for more variation are the “Confederate State” and “Right to Work” variables. Being a former Confederate state increases the number of holidays by an average of 1.08 days because several observed holidays commemorate the Confederacy: Robert E. Lee Day, Confederate Memorial Day and Jefferson Davis Day. The second variable measures whether the state has “right to work” laws that prohibit unions from requiring employees to join and/or pay dues. States that moderate the power of unions with right to work laws unsurprisingly grant 0.94 fewer holidays on average.

The above illustrates how regression analysis can identify actual demonstrable relationships that go beyond what appears plausible.  Such analysis can be applied to interesting questions of daily life as well as more serious queries, and is regularly used by experts and (when properly applied) accepted by courts in litigation settings.