Settlement May Not Provide Class Members with the Benefit They Expect

Settlement May Not Provide Class Members with the Benefit They Expect

In a case highly reminiscent of a prior lawsuit against StarKist Tuna, Trader Joe’s has been embroiled in a class action claim regarding the degree to which it fills its tuna cans.  Plaintiffs’ claim that reasonable consumers would believe that the cans contained an adequate amount of tuna and were misled because the cans were instead under-filled.  As reported by Law360, Trader Joe’s has now agreed to settle the claim for $1.3 million.  Plaintiffs have asked the Central District of California “to give preliminary approval to the settlement…, saying the payout, which comes to $29 per claim, is fair and adequate considering the price of a can of tuna.”

Many would suggest that $29 per Claimant seems high when considering the dispute involves a can of tuna.  The cans in question were 5 ounce varieties, which generally sell for under $2.  And no one is suggesting the cans were without tuna, but merely that they failed to contain an “adequate amount of tuna.”

So what constitutes an “adequate amount of tuna”?  Plaintiffs allege the 5 ounce cans did not meet the federally mandated minimum standard fill of 3.23 ounces per can of pressed cake weight (“Pressed Weight Standard”). Tests by the U.S. National Oceanic and Atmosphere Administration (“NOAA”) demonstrate that the cans instead averaged between 2.43 and 2.87 ounces of tuna on a Pressed Weight Standard, with several varieties of Trader Joe’s tuna falling between 9.9% to 24.8% below the prescribed amount.  The FDA currently requires that tuna which fails this standard be labeled “`Below Standard in Fill”.  Plaintiffs allege they would not have bought the tuna had it contained this label and assert claims for: breach of express warranty, breach of implied warranty of merchantability, unjust enrichment, negligent misrepresentation, fraud, violation of New York General Business Law sections 349 and 350, and violation of California’s Consumer Legal Remedies Act, Unfair Competition Law, and False Advertising Law.

In responding that the tuna amount was in fact adequate, Trader Joe’s noted that its canned tuna labels do not contain any statements regarding the “pressed weight,” but do contain representations as to the “net weight” (5 oz.), and the “drained weight” (4 oz.).  Both of these amounts were accurately stated, a fact which Plaintiffs did not dispute.  Trader Joe’s argued that the pressed weight standard is outdated and inaccurate, and noted that the FDA was reconsidering its use.  Trader Joe’s further pointed out that the FDA had already granted a number of the “Major Tuna Producers” a temporary permit exempting them from its application.  Trader Joe’s had requested similar relief from the FDA, but had not yet received an answer.  Trader Joe’s also argued in its Motion to Dismiss that the claim for unjust enrichment, a form of restitution, was duplicative of other claims.  However, the Court determined that such claims could be asserted in the alternative.

In settling, Trader’s Joe’s has offered a per claim value that is similar to the prior litigation settlement involving StarKist brand tuna.  StarKist’s settlement indicated it would offer customers who purchased any of the items in question from the brand between February 19, 2009, and October 31, 2014 a choice between $25 in cash or $50 in tuna vouchers. The Settlement Fund was $12 million: $8 million in cash and $4 million in product vouchers.

However, the response to the settlement offer was so robust that it created a world record, with 2,359,877 claims and only 60 opt-outs (as of three weeks before the November 20, 2015 filing deadline).  Such popularity was to the detriment of individual Claimants, as the claims were subject to pro rata dilution.

Under this pro rata dilution, the Settlement Fund (still not distributed due to ongoing appeals) will be divided between the number of ultimate Claimants.  After the Plaintiffs’ lawyers are granted their 1/3 ($4 million) plus nearly a million in out of pocket costs for litigation and claims administration, approximately 60% remains for the unexpectedly large number of Claimants.  As a result, the Proposed Settlement is expected to provide $2.11 for cash Claimants and $4.68 for voucher Claimants, calculated by Plaintiffs’ lawyers as follows: 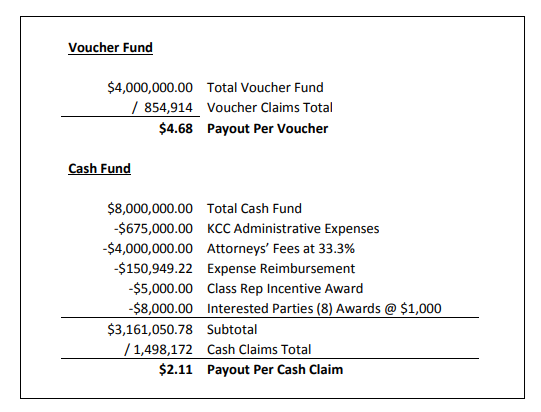 “an excellent recovery that will fully compensate most Class Members for 100% of their alleged losses, and possibly more. Through-the-register sales data show that the average retail price for a 5-ounce can of StarKist Chunk Light In Water was 86 cents during the Class Period. Class Counsel’s testing with NOAA showed an average underfill between 4.5% to 16.7%, resulting in damages of 3.87 cents to 14.3 cents per can. A $2.11 cash payment would provide full recovery for 14 to 54 cans. A $4.68 voucher would provide full recovery for 32 to 120 cans….

At these levels, most Class Members will be fully compensated for their alleged losses. Some will no doubt recover more than the full amount of their actual damages.”

Assuming a similar cost structure and level of popularity occurs with the Trader Joe’s settlement, consumers will likely receive a check which is a small fraction of the stated $29 per claim.